If I’m being totally honest, I am disappointed in my performance in the half marathon I ran recently. I know, it’s an accomplishment, right, to complete 13.1 miles. That’s really fucking far. Yes, so there’s that. But I didn’t feel great and my time was slower than the last one. And miles 12 and 13 were a slog, slightly uphill the whole way, head down, just putting one foot in front of the other. I was unable to stick with my daughter-in-law, too, from pretty early on, so even though there were 26,997 other people similarly engaged, um, I was on my own, in my head, keeping my own counsel. Yes, I finished, but I just wasn’t psyched.

OK, I lie: there was that moment I crossed the finish line and my son and daughter-in-law were standing there waiting for me, THAT was awesome. Along with the realization, yay, it’s over.

But just not loving the fact that I didn’t feel strong, you know?

When I mentioned this to my husband, this feeling of let-down, he said,

“well, it sounds like you trained to just survive it.”

Hell, another one of those times when he is not just right, but weirdly, wisely so clear-seeing.

So wisely clear-seeing. Yes, I trained. But not as consistently as I have done the past. Nowhere near as consistently, telling myself, “I’ve done this before. I’ve got this” as I bailed on yet another middle of the week run. Psychologically, it IS really important to know you’ve done it before. Sometimes that’s all that’s needed to push through those rough, grinding times (or miles, or hills) and get to the other side.

But busted: I didn’t train to feel great the whole way, let alone to set a personal record.

And so that’s what happened.

I survived, but didn’t thrive.

Sure, I coulda gotten lucky. It might’ve just been one of those stellar good days when everything comes together like magic, when it’s easy, smooth, and I’m smiling as the miles go by.

Those stellar good days, though, aren’t something you can bank on, that you can generate with wishful thinking

In truth, it’s the training that creates those magic days. That training is the secret sauce, the fairy dust.

If I had no fairy dust on that half, well, I know why.

In this way, running is exactly like business. Doing the work, consistently, even when you don’t want to – showing up and delivering your webinar even when registration isn’t where you want it to be, keeping at your offer even if your first launch-attempt fell flat, putting out your blog and your ideas and your voice even when you’re not sure anyone’s listening – the WORK is what creates the magic.

Work is what creates magic. 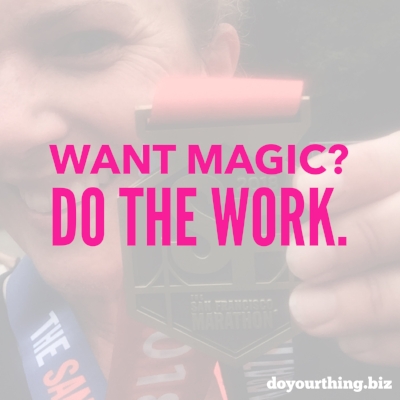 It is possible to get lucky. But your chances of getting lucky, of having the capacity and vision to capitalize on luck, timing, the planets coming together, get SO MUCH GREATER when you’ve done the work. When you’re trained.

No matter what the sponsored ads may say, there is no magic formula you can drink or system you can implement that can replace the deep value of DOING THE WORK, your work, whether it’s putting in the miles or putting in the years building your reputation and credibility as a leader in your industry.

I’m a runner for life. It’s the way I learned, as a teenager, that I was actually strong and capable. It’s the way I actually learned to think & develop a sense of my own self as a very young woman, over hours of conversation and miles with girlfriends. It’s a gift that keeps on giving.

Nowadays, as an entrepreneur, I see that how I’m running is exactly how I’m doing everything else in my life, including my business. If I’m being inconsistent with my training, then I have to ask how else am I not being consistent? Am I doing the same in my business:

Working just to survive? Or thrive?

The realization that I just did what was required to survive those 13 miles lit a pretty hot flame under me. I want more than that. In my business, too, I want to do better than survive, so I’m re-committed to doing the work.

And I’ll have plenty of time to come up with new ideas. My next half is in four months, and this time, I’m training to thrive. See you on the road! 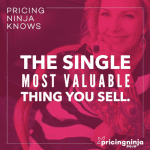 The single most valuable thing you sell2. Pricing Strategies 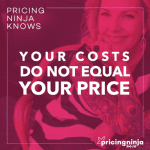 Your costs do not equal your price.2. Pricing Strategies