The Single Most Valuable Thing You Sell

“Sometimes, when we’re terrified of embracing our true calling, we’ll pursue a shadow calling instead. The shadow calling is a metaphor for our real career. Its shape is similar, its contours feel tantalizingly the same. But a shadow career entails no real risk. If we fail at a shadow career, the consequences are meaningless to us.”     – Turning Pro, Steven Pressfield

I went looking for Steven Pressfield’s Turning Pro the other day. I didn’t have to go far to find it, since it and The War of Art are never far from my desk in case I need a little nudge to Get On With It Already.

Specifically I was remembering a day four+ years ago when my business was new, a day I’d actually combed my then-pink hair and put on actual clothes (matching pink sweater) to drive to a new client’s home office to fix her Quickbooks Desktop. [There is just so much to unpack in that sentence, all the things I don’t do anymore…] I was super-nervous, even more so when I looked through the windshield of my weak-ass Prius at the narrow super-steep & winding rutted dirt driveway of her house. As I white-knuckled my way up and up, I worried: what if I couldn’t actually fix her problem? Assuming I could keep the car out of the steep ditch lining the driveway, did I know enough to be here?

All of that fear – and believe me, that fear was REAL. I was drenched in sweat by the time I met that client for the first time outside her house – was actually masking the thing I was really afraid of. The thing that actually represented the biggest contribution my business had to make to my life as a whole, to my confidence, to my maturation as a person. 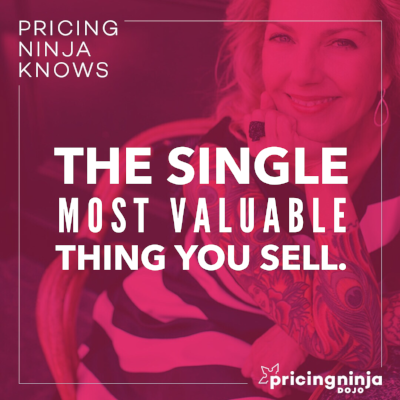 The most valuable thing you sell is you.

When I started my business, I offered three services: bookkeeping, social media and writing, all things that I posited entrepreneurs would want help with, all things that I’m good at. All things, I found out very fast, I was actually hiding behind.

Those three things were a shadow calling. A useful shadow, but not the real thing.

That shadow calling? It worked. I was right: people wanted that. Problem was I was not loving it. It worked, like I said, but I still had the feeling it wasn’t quite right. I was missing the mark somehow, I knew. I’ve kept tinkering with it over the years — no more housecalls, no more Quickbooks Desktop, for example. No more being on call to just fix problems. No more purely what I call Numbers Bitch. Way, way more Business Witch.

Flashback: way, way long time ago, I was 17 and ran into a friend panhandling outside of Marcello’s Pizza near my parents’ house. This was a tough and beautiful girl I totally admired, self-assured, smart as a whip, taking no shit from no one. There she stood with her hand stuck out for quarters, and said, when I asked her about it, that she didn’t work inside the pizza place, like others of our friends. She didn’t want to be paid for something she DID. She wanted to get by on who & what she already WAS.

Um, yeah. That darling tough little Rosetta, she had it right, with her sign and her swagger.

What  I’ve come to realize in my business — what dawned on me slowly, as I shed a lifetime of Hustle and feeling that I constantly had to prove myself — is that while, yes, what I know matters, it matters far less than how I in particular am able to deliver. What I didn’t know yet, four years ago and sweating my way up that driveway, was that even when I don’t know, I’m still fine. I can still get by purely on who I am.

The most important thing you’re selling: you. Your combination of experience and smarts and humor and attitude and skill and insight.

I’m so grateful to be past that particular shadow calling that I started with. I might be in another now, and yet moving constantly toward the real thing, toward what I really want, slowly and inexorably, growing in confidence, knowing enough, not having to prove anything. 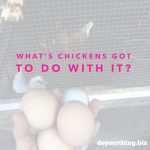 The Chickens ARE the Brand.4. Doing Your CEO Job 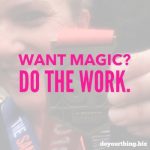 Want Magic? Do the Work.4. Doing Your CEO Job