The Thing About Game Changers…

We were talking about cash flow in her business for the very first time. Having enough money in the bank had never been an issue before; in fact, it was pretty much the norm that cash was just piling up in there as her sales totals kept going up and up.

But now, suddenly, after 2+ years of constant growth, things were tight. She had her eye on the checking account balance daily. She was worried about some upcoming bills that needed to be paid and how to make it all work.

She’d gone from feeling like everything was on the upswing, going great, expanding, to feeling super-tight, a bit panicked to tell the truth, unsure. What. The. Hell.

She said, as we were talking about the year so far, that writing that big check this year to buy a house had been a game changer.

That’s the thing about game changers. They change the fucking game.

See, once you step up hard, once you push to that place you’ve always wanted to be, the way things were? Gone.

It sounds absurd when I say it this way, but: When you change the game, the game changes. It seems so simple, but every single one of us forgets, learns it like it’s something brand-new, when we find ourselves there.

The things you did to get you here, not so effective anymore.

Which can be very unsettling.

Especially when your money is involved.

Instead of worrying that you’re doing something wrong – which is, naturally, the first place most of us go when it comes to dollars – so much better to recognize that when you change the game, well, now you gotta adapt to a new game.

That’s not bad. It might feel bad to be stressing about the bank balance for the first time in a long time (especially if you’re a person, like me, maybe you, too, who has a long history of struggling to get by, so that returning to that feeling just suuuuuucks), but honestly it’s not bad. It’s just different.

And it means you get to be different, too. You get to learn new ways, develop new ways, to operate.

When you step up, you step UP.

Which actually, though it doesn’t initially feel like it, is good. Congratulations. You’ve hit a new level.

You bought the house. You changed the game. More good news: you get to change, too. 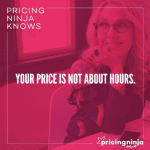 Break Up with Hours2. Pricing Strategies

The Bad with the Good4. Doing Your CEO Job