When I was earning my stripes as a Profit First Professional, I experienced what a lot of business owners do when implementing this simple-yet-genius cash management system.

Yeah, basically: a glass of cold water to the face.

You see, until that moment, until I broke down the spending inside my business according to the Profit First framework, I was unaware of the total imbalance in my expenses. How much more I was spending on other people than I was keeping for myself. How caught up I was in the top-line, my total Sales, instead of in what actually matters end of day: getting paid, having an actual profit, controlling my costs.

And how was that imbalance happening? 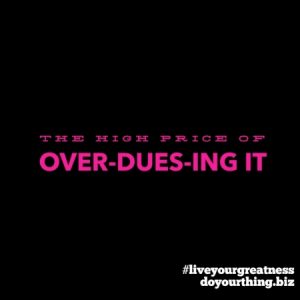 Simple, I was over-dues-ing it.

You know, as in Paying My Dues. In the literal sense, I was signed up for all kinds of monthly subscriptions, some duplicative, others unused, spending duckets on tech I wasn’t even using, thinking “Whatever, it’s just $20.” But in an even bigger way, I was spending a whack amount on the figurative dues-paying, you know, that stuff we like to lump under that nefarious word, “investment” -> Certifications. Trainings. Workshops. On-line courses. Paid masterminds. Money we spend speculatively, telling ourselves, “I’ll make that back ten-fold.”

It’s not that I couldn’t see that spending before Profit First. It’s that until I implemented the system, and saw how far over the recommended 30% on Operating Expenses I was, until that moment of facing reality, of Getting Real, I could believe my own bullshit.

But then, cold glass of water to the face. Reality. Facts. And a path forward.

That reality I faced was composed of the NUMBERS, of course, the glaringly whack amount I was spending. And it consisted of FEELS. I had to ask myself Why was I spending so much on training? What did I think I was going to gain? What did I think I needed? How was I not enough already, with all this real-life experience and skill and personality and drive?

Yeah, basically I got to that place where I was asking myself the questions my husband had been asking all along:

Why do you think you need that?

Truth was: I didn’t. But I was nervous, maybe like a lot of new business owner, baby-entrepreneurs starting out. And susceptible, too, to all of the six-figures-overnight pitches in my Facebook feed. All the glossy ads selling me somebody else’s method-to-success.

That cold glass of water to the face? It changed my spending, and it shook me to my core. It let me see the extent to which I was truly over-dues-ing, keeping so little for myself ‘cause I was so busy giving it to others, leaning on other people’s cred instead of believing in my own.

Because that, my friends, is the big problem with over-dues-ing it. Even beyond the financial hole you can dig under yourself, it’s that deferral of self-confidence, it’s that lean-away from what you might create, left to your own devices, when you buy what worked for someone else.

YES, I’m all about learning, about best practices, about watching what works for others, and also being super-careful that we don’t rob ourselves of the really big opportunity that lives inside each of our businesses: to do our own thing. Our thing. Our way.

How ’bout you? You over-dues-ing it?

It’s a confidence game3. The Mental Game of Pricing 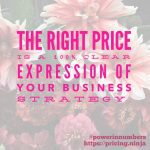 A Little Secret About Pricing3. The Mental Game of Pricing